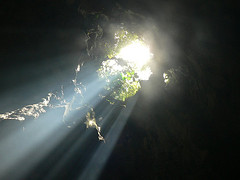 Last fall, a colleague came to me and informed me that Ray Bradbury’s book, Fahrenheit 451, had been edited. Ironically, a book against censorship and the dumbing down of society had been castrated. One of its primary allusions had been changed. The publisher changed the word from “cave” to “café.”

Did the editor even know this small editorial choice did this? Took away a philosophical reference? Did the editor consider that an author chooses his words with care? To any reader who cherishes Ray Bradbury, and his message, it was a slap in the face. I can see Socrates, Plato, and Bradbury shaking their heads in plain awe.

Did the publishing company even care to double check the edits? For the sake of making the reading easier, did they think for a moment that maybe that specific word choice was to jog the reader’s mind and have them question it’s placement?

It was a word. It was juxtaposed in the text to illuminate the point. It was an allusion to Plato’s Allegory of the Cave.

As life continues to unveil itself as a series of opportunities to “leave the cave” and walk toward light, I am left asking:
-How can we teach students about complexity when the texts are being made simpler?
-How will future generations know the difference once all the old texts have gone away?
-How can the truths of Bradbury (and even that of Plato) continue to help develop society when they are sublimely being eliminated or dulled?

There are times when I have left a cave… seen the light. And realized in that moment how many people are left watching the shadows dance on the wall thinking they themselves have seen the light. I wonder if Aaron Swartz looked back and saw how many people were still in the cave believing in the shadows when it came to the laws of censorship. I wonder if he just felt overwhelmed. How great is this fight to retain a knowledgeable, articulate, free-thinking society… this democracy. The texts are changing right beneath us.

That’s why we teach, right? To help the individual decide if they want to leave the cave and see the light? At least give the reader the option… don’t take away that choice.

A word, a look, a moment – no matter how small the instance… sometimes occurs for a definitive purpose.

My latest trip out of the state was interesting. My husband and I flew to San Antonio to take part in the National Association of Secondary School Principals conference. I had a great time networking with administrators from different states. I thoroughly enjoyed hanging out with administrators from Michigan and getting to discuss some more local issues in a removed environment. These experiences alone made the conference worthwhile.

But Will Richardson’s latest post, Urgent: 21st Century Skills for Educators (and others) First, brought me back to a thought I had while I was amidst the conference and presenters. There was little technology present, appropriate modeling of tech networking, or even discussion regarding its implications for learning.

And worse, it was painfully obvious by their death by PowerPoint presentation styles that their own adoption of technology as a communication tool not to mention a networked learning tool left a great deal to be desired. The governors, the state superintendents, the consultants…from none of them did I get the sense that they could give a great response to a request to model their uses of technology to teach and learn effectively, especially in the context of networks.

I, too, had this overwhelming sense of “what is education to do if our leaders don’t know the basics?” I watched day-in and day-out as presenters used overhead machines, read off powerpoints, and spoke of email as if it was still the fastest (and latest and greatest) tool for communication.

No, Will, you are not a snob. There are many of us who are asking ourselves the same questions on frequent basis.

I also just experienced a session at Macul where a gentleman gave a presentation on Web2.0 technologies. I had heard of all of them before, but instead of walking out, I sat through it. Now, it was obvious that his “inclusion” of technology into the classroom had been praised by his administration. He had received accolades for his efforts. But I sat through the presentation on edge, slightly – no truly – uncomfortable. Uncomfortable for two reasons: the first being that there was an attentive audience, the second was because all of this demonstrations and tech tools facilitated only recall. He only reached Bloom’s basic level of taxonomy, knowledge, with all of this technology. He was awarded for simply getting tech into the classroom… not for the level of critical thinking he was (or wasn’t) providing the kids.

Now, maybe I am the snob. But technology for the sake of technology doesn’t create 21st Century Learning Skills. An electronic flash card is still a flash card. If his intent was to show different activities for different levels of learning, he greatly missed the target.

Everyday I go to work, I am so grateful my district leaders have vision and an open office to discuss pedagogy (including technology integration) daily. But I worry about the whole of the US educational system. I worry about the kind of citizens we are creating. Sheltering them too much, not teaching them appropriate skills, and using the technology just to say we did…. the horizon at times looks so far away.

The system is so hard to change. What will it take?

Kate Olson’s recent post, Digital Confusion, discusses much of what I have been reflecting on lately. I also have been wondering about the greater picture behind the blogosphere… Kate writes:

The great thing about opening up our worlds to comments is that we’re able to hear other sides of an issue and gain perspective – when people link to a blog post of mine and rant about why I’m wrong, it’s eye-opening to see how differently someone else thinks about the same issue (and links are always good, right?) and it’s great to be able to chime in on the comments on THEIR post to tell my side.

Kate continues to wonder what impact this is going to have on kids, as far as being open to scrutiny on the web. Here are some thoughts:

Maybe the blogosphere is supposed to bring us full circle. Socrates believed the best education was in the form of a question. Maybe the blogosphere in some strange way is supposed to bring us back to that same philosophy. The best answer is maybe another question. Maybe we don’t have it all figured out. Maybe we blog to ask the deeper questions about why we do what we do. Maybe we blog because we want to hear the other questions from a different perspective.

We get in trouble when we take things personally, and not academically. The bigger question, or idea, gets lost in the doubt and anxiety. Shift is happening because of a communal dialogue, not because of one person having all the answers. Shift happens because of the questioning, the requestioning, and the reflection behind the questions.

Our kids would be better off writing, blogging, sharing ideas, than believing there is always one right answer. Sometimes there isn’t, and for them they need to understand that’s okay. It’s what makes us human. What should we do with our children and the internet? Teach them how to question, requestion, and reflect. That’s the best any of us can do.

After reading Will Richardson’s post “On Twitter and Balance,” I had to sit back and reflect for a second. I have been twittering for a relatively short period of time, and yet I am completely hooked. I sign it at school. I sign in at home. And my big question was why?

Gary Stager said in his preso yesterday how nothing substantial is ever gained in Twitter. Is this true?

Helen Keller’s famous quote personifies my need for Twitter at this point, “Keep your face to the sunshine, and you cannot see the shadow.” Twitter has become the community of teachers that most don’t find in a school. A community of positive communication, true empathy at times, and a constant sounding board. And what makes it great is the idea of giving. In order for this educational community to exist there must be a certain amount of deprivatization of the classroom and personal practices. However, the current reality of the local HS situation leaves much to be desired. I wait for the day when my colleagues at the HS will be okay with exploring each others’ practices and presentations. Where dialogue is open and ideas are shared. Until then I have my twitterverse. Twitter provides an environment for system change that one cannot find in a local school on most days. It provides the climate of open-curriculum and community through which constructive dialogue, criticism and applause can be gleaned. At this point in our educational system, while trying to catch up with years of innovation, is there a thing as too much twittering – when the potential of a seamlessly small webapp could bring inherent change to a static antiquated system? I think not.

I tweet therefore I am the change I hope to bring to the system.

After sitting through sessions all day… there is one thing I know. Every attendee should also receive a play day right after this conference. What good does it do to learn all of these great technologies, if one can’t take a day (or two) and put pieces together?

Today I heard a session on using cellphones in the classroom – which isn’t new, but NEW was the amount of tools created specifically for the cellphone and collaboration. (all links are posted on my delicious acct.) I was actually excited again about revisiting this tool. Now, I just need the time to sit down and put a plan of action together.

And, let’s face it, I let a year or two pass- did not update my Moodle version. Same goes for other software… and now, I am burned by hours of time. Time to install, time to set up preferences, time to restart the whole program into the classroom. Back-ups and restores.

So, as I sit here excited about everything I can take with me today, there is also a heavy sigh that comes with the renewed interest.